How the loadcell works

How the loadcell works 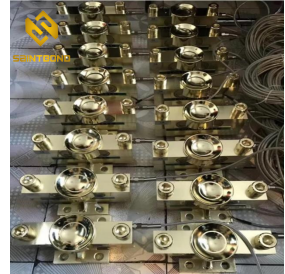 The function of the detection circuit is to convert the resistance change of the resistance strain gauge into a voltage output. Because the Wheatstone bridge has many advantages, such as it can suppress the influence of temperature changes, can suppress the lateral force interference, and can easily solve the compensation problem of the loadcell, so the Wheatstone bridge can be obtained in the loadcell. a wide range of applications.

An elastomer is a structural member with a special shape. It has two functions. First, it bears the external force of the loadcell, and generates a reaction force to the external force to achieve relative static equilibrium; The resistance strain gauge is ideal to complete the transformation of the electrical signal of the strain.

A resistance strain gauge is a resistance wire mechanically distributed on a substrate made of an organic material, that is, a strain gauge. One of his important parameters is the sensitivity coefficient K. When its two ends are subjected to F force, it will elongate, that is to say, deform. Assuming that it is elongated, its cross-sectional area is reduced, that is, its cross-sectional circle radius is reduced. The proportional relationship between the resistance change rate (relative change in resistance) of a resistance strain gauge and the elongation rate (relative change in length) of the resistance wire. It should be noted that the K value of the sensitivity coefficient is a constant determined by the properties of the metal resistance wire material. It has nothing to do with the shape and size of the strain gauge. The K value of different materials is generally between 1.7 and 3.6; Secondly, the K value is a dimensionless quantity, that is, it has no dimension. In the mechanics of materials, ΔL/L is called strain and is denoted as ε. It is often too large to express elasticity, which is very inconvenient. It is often used as a unit of one millionth and denoted as με.